On 05/06/1980, an inferno followed by a huge explosion occured in Port Klang in the early hours of the morning, at about 0245hrs, which later dubbed as 'The Port Klang Disaster' and captured the world attention. The earth tremors were felt from Port Klang down to Klang town - a distance of 5 miles (8KM) away.

Emergency Rescue Unit (ERU) of St. John Ambulans Malaysia-Kawasan Pantai Selangor was activated and officers & members, total 19 members, together with 2 ambulances were immediately rushed to the disaster area to assist the rescue work. St. John Ambulans Malaysia - Kawasan Pantai Selangor (SJAM_KPS) was one of the early birds to arrive at the scene.

Hundreds were injured and many were killed in the unexpected huge explosion followed by numerous small explosions. The scene was like a war torn area with people panic & running away from the town with their belongings and in fear of more explosions as many oil companies' installation were within the fire raging zone. Windows and gates of many buildings were broken due to the impact of the explosions. Our officers & members were kept busy for the next 12 hours attending to the search & rescue work, rendering first-aid and transporting the victims to the general hospital.

At one point, immediately after the huge explosion, SJAM-KPS was directed to go into the exploded zone to search for survivors or bodies. The place was like a bomb hit area with buildings burning, buildings structure on the verge of collapsing, cars floating in the sea and a few were burning. On one side a fire engine lying on its side due to the impact of the explosion. Few small explosions were heard & seen during the search & rescue work and despite the danger, the team risk their own lives and went about their task.

Panic arosed when fire raged fiercely and spread towards the Caltex Installion. The management of Caltex worked frantically to transport-out the oil and the firemen were fighting bravely to contain and prevent the fire from spreading towards the installion.

Fire-engines back-up from throughout Selangor, F.T. and the neighbouring states were called.

After more than 12 hours, the inferno was tamed down and finally SJAM-KPS was allowed to call-off the officers & members. SJAM-KPS earned the respect & praise from the Port Klang Authority & Fire Bridage for their dedication, responsibilities, committment and bravery despite the danger.

After 14 years history, in 1994, The Order of St. John, England, through our National HQ, finally regconised the bravery deed shown by our officers & members and present them the meritorious bars.

Our Area HQ is proud that till today we are the only in the history of St John Ambulans Malaysia to receive the meritorious bars from The Order of St. John, England.

The presentation ceremony was held on 19.06.1994 at Subang Parade in conjunction with the launching of the SJAM National Flag Day by the Minister of Health, Dato' Lee Kim Sai.

The ERU members who responded the call were as follows:-

Todate, after 32 years, we have only 4 of the above 19 ERU members still serving in St John Ambulans Malaysia - State of Selangor and they are: 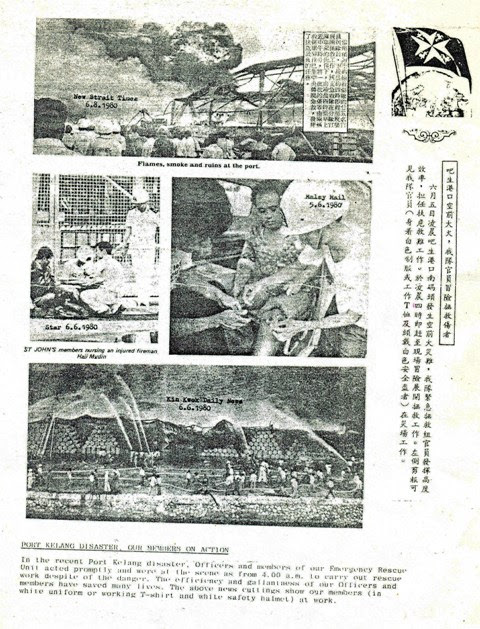